“Horsham has always had a place in my heart”

They say that absence makes the heart grow fonder and that certainly seems to be the case for new signing Lewis Taylor, who can’t wait to get going again in the amber and Lincoln green after a gap of twelve years.

Lewis, who rejoined Horsham this week from National League South Dorking Wanderers, achieved nationwide fame when he netted the late penalty that secured the Hornets’ 1-1 draw with Swansea City in the FA Cup 2nd round back in 2007 and it’s memories like that, which the 34 year old is hoping to revive during his second spell with the club. 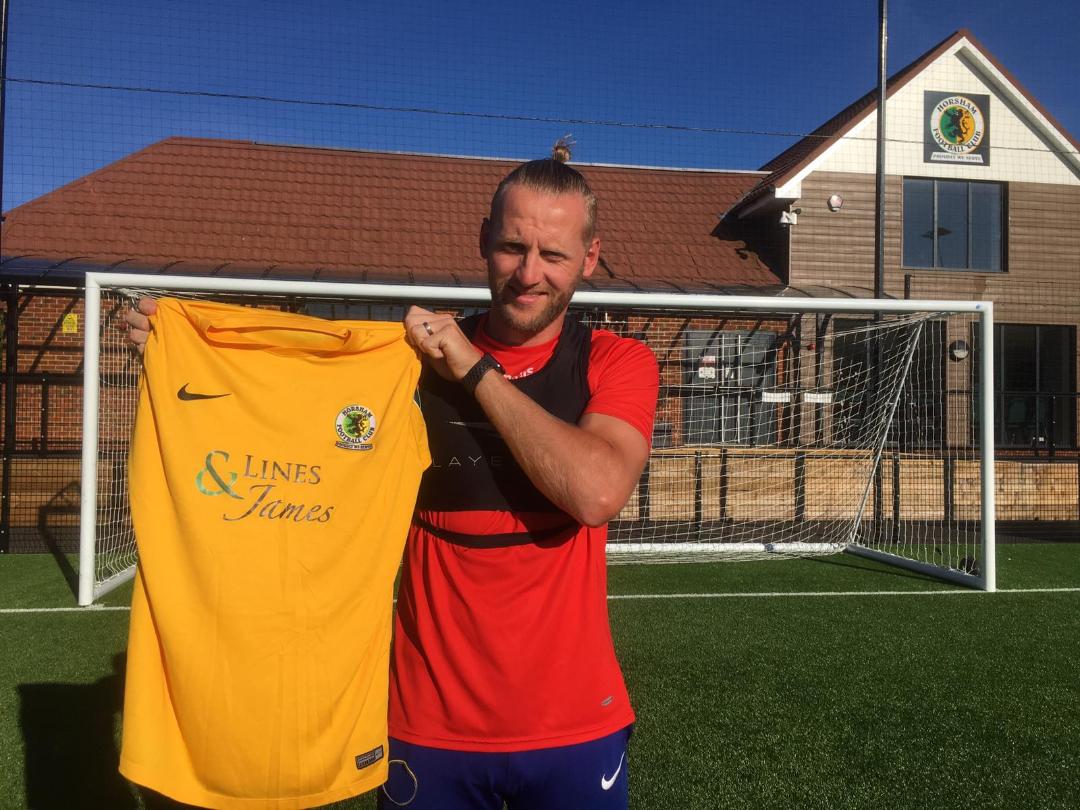 Matt Jones sat down with the midfielder for a socially-distanced chat to get his thoughts on coming home and began by checking on his fitness, just a fortnight since Dorking’s season came to an end.

“I feel really good. Obviously being back for four or five weeks with Dorking has helped and during lockdown I’ve shed a bit of weight, for my own purpose more than anything, but obviously it’s helped with the football.

“I’m actually quite glad that we haven’t got a huge lot of time off again because it’s hard to switch off and get going again. I’ve had a week off, I’m back in and I’m ready to go again now. It feels like the season should be starting so I’m raring to go.”

MJ: You made quite an impact in your first spell with Horsham, with that Swansea match obviously the highlight for both you personally and the club as a whole. What do you remember of those two seasons you had with us?

“The Club holds huge memories for me and has provided me with one of, if not the, biggest highlight of my career.

“I’ve been fortunate to go on and do quite a few things in football; I was full-time with AFC Wimbledon, I played again in the FA Cup against Millwall and was fortunate enough to score there as well, but being where I was at the age I was, knowing what level Horsham were at the time and where we were striving to go, to do what we did against Swansea in those conditions was incredible.

“I scored the penalty but there were 13, 14 other people out there and we grafted in that weather. To grind out the draw, and then take it back to that fabulous stadium and spend a full two days being treated like absolute professionals is still one of the best memories of my career by a long shot and I’m absolutely buzzing to be back at the club where it all started, and hopefully in a few more years I’ll be able to create even more memories.”

MJ: You’ve played for a number of clubs since then so how have your experiences changed in that time?

“So from Horsham I went to AFC Wimbledon and spent a few years there, that’s when I went full-time. After that I then went to Kingstonian for a little bit, then I had a short spell at Carshalton, then went back to K’s for a little bit longer then had the long spell, three years at Margate and then went to Dorking.

“Like anything, you get older, hopefully you get wiser, and I’ve definitely learnt a few things. I’ve gone to the Conference and League Two, then came all the way back down, but I’ve always been one of those people who believes you never stop learning.

“It doesn’t matter what level of football you’re at, or how old you are, you always keep learning and hopefully I can bring a bit of the knowledge I’ve gained to the youngsters and even some of the boys who haven’t played as high as I have. Hopefully we can all strive as a unit to take this club to where it should be.”

MJ: Horsham supporters will have fond memories of your first spell with us but what should they expect from the ‘new’ Lewis Taylor?

“I’m going to be a little bit different to what the older fans hopefully will remember me for. Back then, I was a young 20, 21-year-old box-to-box midfielder who could get up and down for 90 minutes without a fuss. I’m 34 now so the legs are a little bit heavier but I’m still feeling really fit so I’m a little bit more of a holding midfielder if you like.

“I still like to get forward every now and then, I still like to strive to end up with a few goals throughout the season but, yeah, I like to create the play from just in front of the back four now, and let the young ones who have got a lot of speed do their stuff ahead of me.”

MJ: What are your ambitions for the new season, both personally and for the club?

“I’m hoping to have a really good season and push this club to where we’re striving to go. I’ve had a chat with the manager and the assistant manager and know them both really well. It’s one of the reasons why I wanted to get the deal done, to come back here.

“One, because it’s Horsham, where I spent a couple of really good years and, two, the manager and the assistant want to go in the right places so I’m hoping in May time, we’re where we should be. We want to at least be in the play-offs, and that’s hopefully where we can go.”

MJ: With your experience and obvious qualities, I would imagine a lot of clubs would have been interested in signing you up this summer so what made you decide to return to Horsham?

“A number of things. One of the biggest reasons is because Horsham has always had a place in my heart. I started playing men’s football when I was 15, which was very young but Horsham is the club where I class my career as having really started.

“We had a really good squad and I learnt my trade off of Tommy Warrilow, John Maggs, and people like Rob Frankland. All those different characters brought loads of different things to the changing room, to the game, so that for me was a huge selling factor, being able to come back to somewhere where I have so many memories.

“My mum and dad, bless my mum who’s not with us anymore, they used to come to every game so it was something that really was massive for me.

“And like I’ve said previously, I know Ross and Dom really well. They’re striving to take this club where I personally feel it should be. We’ve got good facilities now, so this club should be looking only one way and that’s up, as far as we can, and I’d like to be part of that journey for as long as I can.

“And once I’ve finished my playing career, I’d love to stay involved with football, and I’d love it to be here because as I say, Horsham’s very special in my heart.”

Main image: Lewis in action for Horsham at Swansea in December 2007