Any match against Crawley Town is a bit special but this Saturday takes on extra significance as, not only is it the first meeting between the two near neighbours for nine years, but the occasion also marks the official opening of The Camping World Community Stadium.

After the success of two relatively low-key ‘test’ events against Hartley Wintney and Haywards Heath at the new ground in the past week, we are thrilled to welcome Gabriele Cioffi and his Sky Bet League Two side for what could well be the first of several meetings with our old rivals in the coming years.

Nowadays the rivalry, if one can still call it that, is purely of the geographical kind rather than on any competitive level but that doesn’t mean the match will be taken any less seriously by the opposing teams, even if there is a greater sense of camaraderie between the respective clubs than perhaps existed in the past. The reason for that is a new agreement that sees the Reds using our Hop Oast facility as their permanent training base, a deal that was negotiated by Hornets Commercial Director Paul Osborn and his Crawley counterpart, Joe Comper.

“Back when plans started being made for our new home at Hop Oast to become a reality, perhaps one thing that wasn’t at the forefront of the Board and Committee’s minds was the possibility of our sharing our stadium with our near neighbours along the A264” reflected Osborn. “In fact, when you think about it, it’s a perfect match, with Crawley lacking a permanent, high-quality training base, and the Hornets having a superb new facility with a large clubhouse and two all-weather pitches, which were potentially going to be empty during the day. And so, at about the same time as we celebrated handover of the site, the Reds took up their residence with us on four and sometimes five days each week.

It’s a great pleasure to report that Gaby, his management team, coaches and players have been a delight to work with and have coped admirably with all the (sometimes chaotic) setup that has been going on around them as they try to focus on their pre-season programme. For those of us who’ve been around the stadium in the past few weeks, it’s been fascinating to watch our guests’ pre-season build up, and in particular the sheer hard work that professional players are expected to go through day after day. However, in return for their efforts, they have at least been able to enjoy a high-quality lunch provided by our resident chef Heinz, who seems to be developing something of a culinary fan club among the Crawley contingent!

The coming together of two local clubs is an exciting prospect, and we very much look forward to further co-operation, with the possibility of loan players coming to Horsham and opportunities for our managers and coaches to work together in a genuine partnership. We’ve been delighted to welcome Crawley Town to their new training ground, but for Saturday at least, we’d rather they weren’t feeling too ‘at home’!”

Ironically the situation might well have been reversed when, with the Hornets investigating possible solutions to the impending period of homelessness following the sale of Queen Street back in 2008, discussions to groundshare at the Reds’ Broadfield Stadium reached an advanced stage only to fall through when the League refused to agree to the application on the grounds that it would be ‘logistically impossible’ to play matches on consecutive days. We are therefore delighted that no such barriers should prevent us from coming to the assistance of our more loftier close neighbours and although they may have been training on it for just a few weeks Cioffi, who is overseeing his first pre-season with the Reds, has been quick to sing the ground’s praises. “The facilities are amazing. Everything is perfect; quiet, good pitch, good dressing rooms and places for the lads to have some food and relax. Whatever my team needs is here, so it is really good.”

In a scenario of which Dom Di Paolo will be all too familiar, Crawley have suffered in recent times to secure a settled training base so the timing of the opening of our new ground couldn’t have been better. “It’s massive” Cioffi continued, “especially for a small club like Crawley is in terms of numbers, facilities and everything like that because now finally, thanks to the support of all the Crawley staff and of the club, we are able to have a training place we can call home and not be random around Crawley.”

Having been beaten 2-3 at home by Swansea City last weekend in the opening match of their pre-season schedule, Crawley are set to have another testing run out this evening when they host Brighton & Hove Albion but are still expected to field a strong side for tomorrow’s match and a crowd approaching four figures is anticipated, with several hundred tickets being snapped up in advance amid plenty of interest from both sets of supporters.

The Hornets have strengthened their own squad as they look forward to the test of Isthmian Premier Division football once again and have carried on the good form shown last season by winning their three matches since that memorable May night at Lancing when our promotion was so dramatically secured at the expense of Ashford United. Tuesday’s 2-0 success over Hayward’s Heath took their goals tally to ten in those three games and with Kieran Lavery the latest to commit himself to the squad for the new season, Di Paola has no shortage of firepower at his disposal. At the other end of the pitch the mean defence, that conceded their fewest Isthmian League goals for 45 years last season, should get the sort of test that will prove invaluable ahead of life in the League’s top tier.

Crawley’s visit represents Horsham’s final home fixture before we host Leatherhead on the opening weekend of the Isthmian League 2019/2020 league campaign, on Saturday 10th August, and supporters are advised to arrive early to avoid queues. We are delighted to advise that cash admission WILL be permitted on the day but a reminder that parking at the ground is available for players, officials, invited guests and disabled badge holders only (by advance request), with supporters asked to utilise the RSPCA car park at Wilberforce Way, Southwater RH13 9RS where there will be a free shuttle bus service to the ground running approx every 10-15 minutes from 1.30pm (see map below).

The club shop will be open and taking orders for the Hornets’ new away shirt, as well as stocking a large array of merchandise. 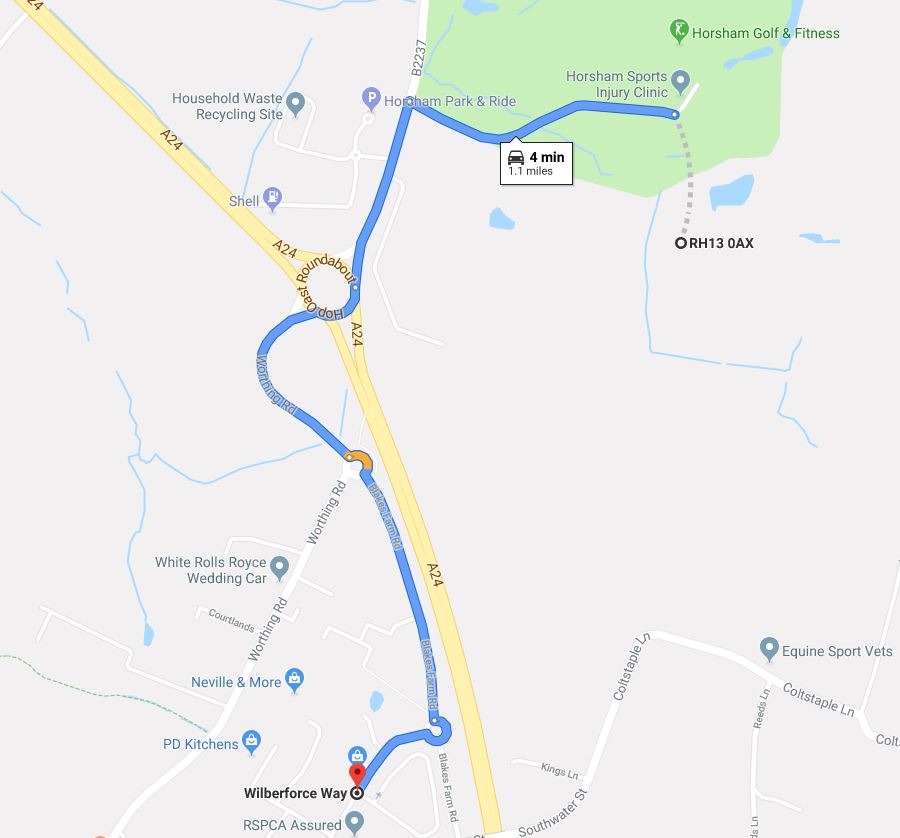