“Awful – it was simply awful”, the West Sussex County Times headline screamed from its back pages. It was a damning one line appraisal of the 1993/94 season in which the Hornets had finished bottom of the Diadora League Division Three table having won just six of their forty league fixtures. “Only the demise of teams like Wivenhoe and Rainham prevented Horsham from relegation to the graveyard of the Parasol League” the local newspaper continued.

It was evident, then, that things would have to change at Queen Street and, with caretaker manager Mike James having taken the reins for the final weeks of the season following John Yems’ resignation, it was left to lady chairman Maureen Smith and her colleagues to bring in the right man to turn the club around. Mark Dunk was that man. A former player, and favourite with the Queen Street faithful, Dunk had been at the forefront of Horsham’s successful spell at the turn of the decade in which, under his captaincy, the club reached the final qualifying round of the FA Cup and fifth place in the league.

With former Hornets such as Phil Somers, Mark Stepney, John Walters and Steve Breach returning to the club alongside exciting new talents Richard Knight, Paul Boxall and Darren Freeman, Dunk fashioned an attractive side that scored eight-four league goals (almost double the tally of the previous term) as the team finished a highly commendable fifth – just five points away from a promotion place. Although this was seen as a major success, Dunk was disappointed. He had firmly believed that his side had been capable of achieving promotion at the first time of asking so he set about rebuilding for the 1995/96 season. In came Wayne Wren, Marcus Cooke, Duncan Green and Mark Chaplin – again, all former Queen Street favourites. Defender Geoff Ward joined from Wick, Chris May from Midhurst & Easebourne and, what would prove to be an inspired addition, Zak Newman from Horley Town. Registering a goal in only his second appearance, the young striker went on to notch an impressive fifteen goals in just seventeen appearances as he formed an explosive partnership with Rodney Prosper in the latter stages of the season.

Early exits from the League and FA Cups left Dunk’s men to concentrate on promotion for which they became locked in a tremendous tussle with Leighton Town. Indeed, the December meeting between the teams proved a pulsating affair with Horsham racing into a 3-0 half time lead only to be pegged back by the Bedfordshire side. For much of the season, the three promotion places were contested by seven teams. As well as Horsham and Leighton Town, there were strong claims from Wealdstone (new arrivals from the Southern League), Harlow Town, Northwood, Epsom & Ewell and Windsor & Eton. In the end, it was the Royalists that claimed third spot, some seven points clear of fourth placed Wealdstone as the other sides failed to match the consistency shown by the leaders.

Some good results up until Christmas, including a 5-0 hammering of Cove, a superb 1-0 victory at Wealdstone and a 6-3 mauling of Sussex neighbours Hassocks in the FA Vase were blighted by the horrific career-ending injury suffered by Dunk against Falmouth Town in the FA Vase. The player-manager suffered a broken tibia and fibia in a 50/50 challenge that was to keep him in hospital for two weeks, during which time he had to undergo four operations. However, he was soon back at the club, shouting instructions from the sidelines as his side suffered just a single reverse in their first twenty league fixtures, including their best ever run of Isthmian league games without defeat. Despite this excellent run of form, Horsham still trailed Leighton Town by five points going into their February 13th clash with Lewes where Stafford Browne’s disputed late winner for The Rooks began a poor run of results in which the club failed to collect any points from their next three outings, leaving them eleven adrift in second place. But a resounding 6-0 demolition of struggling Camberley Town got the campaign back on track and the Hornets were to conclude the season with an amazing fifteen wins and two defeats from their remaining seventeen matches.

Rivals Northwood and Wealdstone were seen off in a crucial four days at Queen Street but Leighton still held a five point lead after twenty-eight games. But, while Horsham’s march towards promotion continued unabated, Leighton found it hard to maintain their own impressive form and slipped to defeats against Kingsbury Town and Windsor & Eton.

Leighton were actually the first to secure promotion to the second division thanks to a 3-1 victory over Epsom & Ewell but, with just two weeks of the season to go, they remained level with Horsham on eighty-six points. However, a shock defeat at home to Wingate & Finchley left the door open for Horsham to snatch the title at the death. But first they had to negotiate a tricky visit to fifth placed Harlow Town. Two goals from Newman and one from Roger Barnes secured a narrow victory leaving Dunk’s side to make the midweek trip to Harefield knowing they only had to avoid defeat to claim the championship trophy. The lowly Middlesex outfit proved no match for the team from Sussex who recorded an emphatic 6-0 victory in front of a large, and extremely vocal, contingent of Hornets’ supporters. Horsham legend Mark Chaplin provided the icing on the cake with the final goal – his first for six years – and the celebrations began in earnest.

Leighton concluded the campaign by gaining some semblance of revenge with a 3-1 win at Queen Street but that failed to take the gloss off a magnificent season for Dunk and his players. Just two years after finishing twelve points adrift at the foot of the table, and possible relegation from the Isthmian League, Horsham were now sitting proudly on top of the pile. And didn’t it feel good? 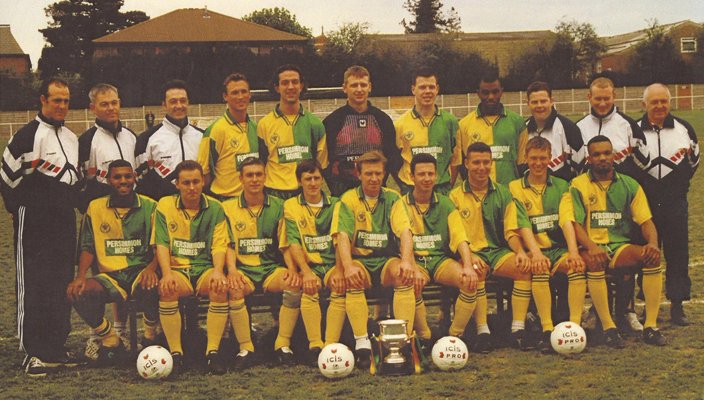